Create an Account - Increase your productivity, customize your experience, and engage in information you care about.

Mission Statement
Selectboard members serve a term of three years, with one or two elected each year. As chief administrative officers of the town, Selectboard members are responsible throughout the year for implementing the decisions of Town Meeting. They are the town’s legal agent; the commissioners of highways and sewers and of police; the board of public welfare; and the license board, holding hearings on license applications for the sale of alcoholic beverages, storage of gasoline, etc. They draw up the warrant for every Town Meeting. They appoint most of the non-elected officials and boards but not the Committee on Appropriations. The chair shares in appointing special committees.

Reports from the Appropriations Committee, historical budget books, bonding schedules, and Town Meeting warrant presentations/information can all be found on the Budget and Financial Information page.

Town Administrator Michael J. Sullivan will retire in June 2021. To assist in filling  the position, the Selectboard contracted with Community Paradigm. The firm is tasked with conducting the search. South Hadley residents can share their thoughts on the preferred qualifications of the next town administrator by emailing CitizenInput@communityparadigm.com or completing an anonymous citizen input survey here. 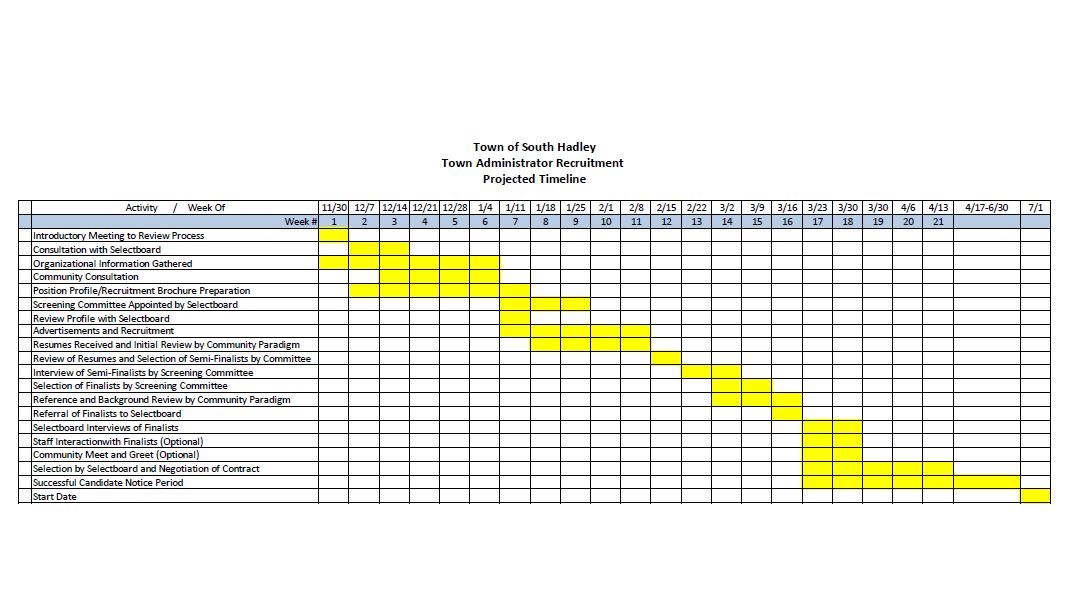 Addressing Systemic Racism in The Community - An Ongoing Effort

The Selectboard in June collectively released this statement asserting their stance against racism:

Following the recent and ongoing acts of violence against the Black community, it has become clear that cities and towns across the United States need to reexamine racism in their communities.

The South Hadley Selectboard stands against racism in all forms, including, but not limited to violence, racism in language, in publications and teachings, and in behavior. We stand in mournful solidarity with all of those in the Black community who have lost loved ones to racist acts of violence. Further, we stand with those who have lost their rights and their voices based on the color of their skin.

It is the commitment of the South Hadley Selectboard to proactively seek out and address racism across our town and within our municipal government. From investigating policing, to reviewing housing, transportation, and planning policies, addressing racism as a public health crisis, offering trainings for our municipal employees, and working with the schools, we will not be silent.

Likewise, we call on the entire South Hadley community to not only commit to non-racist behavior, but to commit to act in anti-racist ways whenever racism is encountered. We call on the community to become educated on racism in all forms, passive and active, and the Selectboard will regularly and intentionally engage with all boards, committees, and commissions to ensure that South Hadley is no home for racism.

Let us be mindful of the humanity inside each of us and rise to meet the needs of the Black community with love, dignity, and respect.


On Feb 8, the Selectboard hosted a community forum on the current nationwide status of solid waste and recycling, and the options into which South Hadley is looking for when its current trash hauler contract expires.  Watch video coverage of the forum below.

Selectboard members Jeff Cyr and Bruce Forcier were members of a trash sub-committee tasked with reviewing proposals for a new hauler contract. Click here to read the new contract between the Town of South Hadley and its trash hauler Republic Services.

A breakdown of the need to increase transfer station fees and the annual trash fee can be found here.

In accordance with the 2010 ADA Standards, an assessment of the town’s public facilities inclusive of public buildings, active and passive recreation facilities, and schools must be conducted to identify barriers to programs and services.

This report is intended to seek the Selectboard’s guidance and direction on some traffic safety and calming strategies and ideas.  This is not an exhaustive study of traffic concerns throughout the Town of South Hadley, nor should the area mentioned in the report be considered the only intersection in need of improvements in making South Hadley residents safer from vehicle related accidents. To read the report, click here.

The cities of Chicopee and Holyoke, and the town of South Hadley, have partnered with the Pioneer Valley Planning Commission to create a regional action plan for more age-friendly and dementia-friendly communities. The plan addresses quality of life issues such as walkability of outdoor spaces, transportation needs, information access, and social isolation, particularly in relation to older adults.

To review a draft of the Town Administrator's FY2020 PBE, click here.